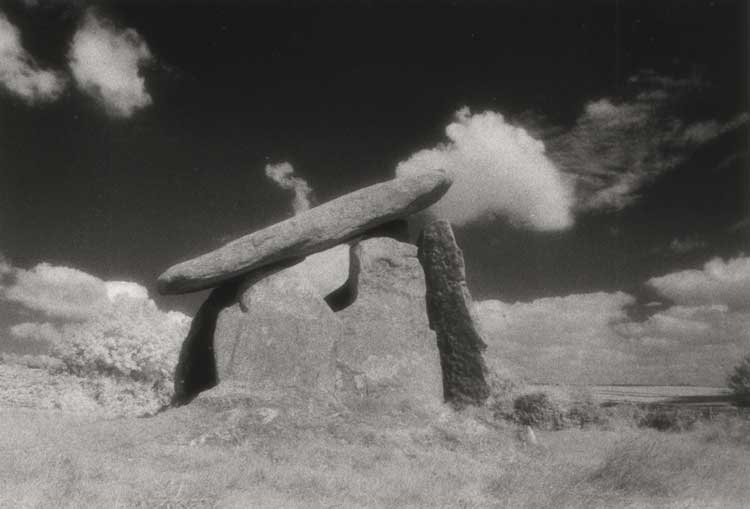 One of England’s most impressive dolmens, Trethevy Quoit is known locally as "The Giant's House", and its overall appearance has changed little since 1598 when it was described as being "a little howse raysed of mightie stones, standing on a little hill within a fielde."

Indeed, such are the impressive dimensions of this spectacular Neolithic chamber tomb that legend has long imbued it with the spirit of the most enigmatic of Britain's folk heroes, and bestowed upon it the alternative name of "Arthur's Quoit."

History Of The Dolmen

Historically speaking the dolmen dates from the Megalithic period and was originally covered by a cairn or mound.

This has long since been worn down to a tiny hillock and left the upright stone supports, surmounted by their enormous capstone, or Quoit, standing sullen and alone in the middle of a field, haunting remnants from a bygone and forgotten age that give the overall appearance of having been left shipwrecked by time.

The inner tomb is accessed via a small aperture where food may once have been left to sustain the occupant on his or her journey into the afterlife.

It has also been suggested that the narrow entrance may have been intended as a means by which the spirit of the departed could go free.

At some stage in the past the support stone located at the rear of the chamber collapsed inwards and left the giant capstone tilting at the precarious angle that gives the Quoit its truly dramatic appearance.

Five cup-mark like hollows have been carved into the fallen stone, whilst the Capstone is pierced at its highest point by a natural hole, the function of which is something of a mystery.

It has been suggested that its purpose may have been astronomical, although no certain proof for this theory exists.

It is uncertain how the dolmen came to be associated with King Arthur.

Several Quoits scattered around Britain have been attributed to the legendary King and nearly all of them have a tradition that they were thrown onto their current location by Arthur in the course of one conflict or another.

It is possible that Trethevy Quoit may have once have been associated with some deed or battle in which the great hero featured and, although the story is now forgotten, its memory lingers on in the alternative name by which this awe-inspiring place of windswept mystery is known.