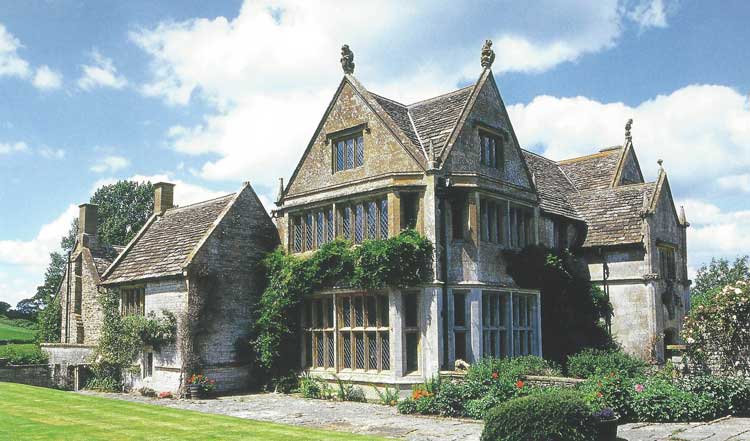 Only two families, the Knoyles and the Medlycotts, have actually occupied Sandford Orcas Manor since it was built in the early 1530's.

It is an eerie looking building, the grey stone walls of which give the appearance of being every inch the haunted house of tradition.

Indeed, so many ghostly tales swirl around it that many people consider it the most haunted house in England and intrepid ghost hunters really have their work cut out with the fourteen ghosts that are said to reside there.

Colonel Francis Claridge, who leased the manor between 1965 and 1979, grew used to sharing his home with the ghosts of numerous former residents, but since his family motto was "Fear naught but God," he was more than happy to let the spirits be.

One evening, when he was closing the house to visitors, he caught sight of an unkempt looking lady who proceeded to walk through the gate and onto the grass. She seemed oblivious to his presence and so the Colonel went over to confront . But no sooner had he walked onto the grass himself, than the woman suddenly melted away into thin air.

In the 18th century a farmer is said to have committed suicide by hanging himself from a trap door inside the house.

Quite what act of betrayal or infamy led to his taking such drastic measures is now long forgotten, but his ghostly form has been seen roaming around the building.

His nebulous ramblings received considerable publicity in the mid 1960's when a member of a BBC production team were caught a glimpse of him dressed in what she described as being an old-fashioned farmers hat and smock. The witness became ill with fright when it was explained to her that she had, in fact, seen the ghostly farmer.

More disturbing is the ghost of a former footman who in life used to while away his spare time molesting the maids of the manor.

Death has, apparently, done little to discourage his wickedness, as Colonel Claridge's daughter found out shortly after the family took up residence at the house.

Determined to see for herself whether there was any substance in the rumours of mysterious tapping being heard in one particular room, she opted to spend a night there.

No sooner had she fallen asleep than she was rudely awoken by a Supernatural force which threw her to the floor.

Suddenly she was grabbed round the throat by icy, though invisible, fingers. Fortunately she was able to fight her way free and flee the room. But she point blank refused to enter the house again after nightfall.

A lady in a beautiful red silk, Georgian dress; a little girl in black who is seen at the foot of the stairs; a wicked priest whom guests have awoken to find bending over their beds holding a black cape with which he appears to be about to smother them; and a sinister man who walks from the gatehouse to the staff quarters leaving the stench of decaying flesh in his wake, are just some of the other ghosts that haunt said Sandford Orcas Manor.

And if an encounter with any of these is insufficient to elicit cold shivers there is always the ghost of the young man who, having grown up in the house, set off to join the navy.

But no sooner had he enrolled at Dartmouth College than he killed another cadet, was judged insane and was sent back to Sandford Orcas Manor where he was locked in a room at the back of the house and was never allowed to leave.

He is said to have died at the age of 27 and to have been buried in a secret passageway behind the Great Chamber.

But on certain nights when the moon is full, his ghostly cries are said to echo throughout the property and he is heard banging on the door of the room screaming to be released.

There are some who suggest that the ghosts of Sandford Orcas Manor are little more than the products of overactive imaginations, although those who have experienced them will testify to the fright they can inspire.

So perhaps the last word on this most haunted of haunted houses should go to the group of fearless investigators from the Para physical Laboratory at Downton who, having carried out a detailed investigation of the house's ghosts, concluded that, "a reasonable prima facia case had been made out for the hauntings."