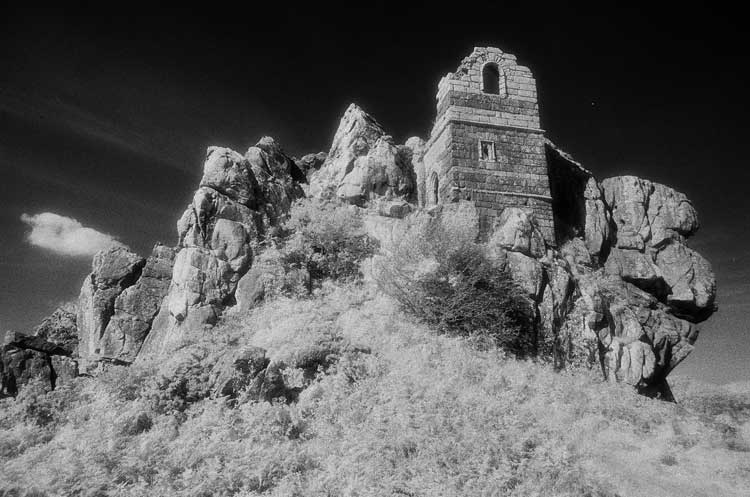 Hermits On The Rock

Roche Rock is solitary outcrop of black granite rises sharply from the surrounding moor-land, its jagged outline able to elicit gasps of awestruck wonder from many a traveller who passes it on the roads below.

There used to be a tradition that the crag of Roche Rock had once been covered by earth, but during Noah's flood the layer of soil over it had been washed away, leaving behind this saw-toothed chunk of splintered rock, which by the Middle Ages had gained a fearsome reputation as a convenient resting place for passing witches and malevolent demons.

Perhaps that is why a succession of holy men, came to the rock when Christianity was first brought to Cornwall, and lived as hermits in a small oratory that had been built between its two peaks? Their prayers served to vanquish whatever evil forces were loose amidst the fearsome pinnacles and the local people could feel safe from demonic interference and influences on their daily lives.

One such holy man is said to have been the hermit Ogrin who reputedly sheltered the lovers Tristan and Iseult in the oratory when they had incurred the wrath of Tristan's uncle and Iseult's husband, King Mark, by falling in love and eloping together.

The medieval poet Beroul, who was responsible for one of the earliest versions of the story, shows himself to have been familiar with the Cornish landscape, and his description of Ogrin's chapel certainly has more than a passing resemblance to Roche Rock.

A Chapel To St. Michael

In the 15th century a more elaborate chapel was built over the hermits cell. It was dedicated to St Michael, the Archangel who was celebrated as a guardian of high places and subjugator of evil forces.

The ruins of this chapel now loom against the skyline, and give the distinct impression of having sprouted from the granite of Roche Rock 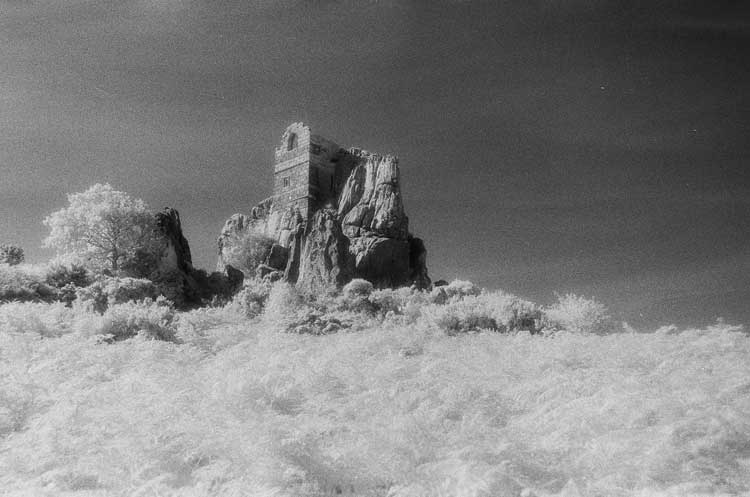 A Strange And Haunting Place

It is a strange and haunting place where you can begin to understand the fears and anxieties that beset those long ago residents to whom the rock came to represent nothing less than the clash of good against evil.

When only this tiny chapel, its solid walls braced against the savage onslaughts of the elements, stood as a silent, though effective, guardian of the landscape, its benign spell offering some semblance of protection against the malevolent forces that those long ago people believed surrounded them on a daily basis.

Here, in a few moments of contemplative solitude you can feel strangely at one with those long ago holy men who forsook their worldly comforts, and dedicated themselves to a life of mystical loneliness, sustained only by their prayers and faith, secure in the knowledge that they were doing God's work on Roche Rock - a windswept place of rare and sanctified beauty.