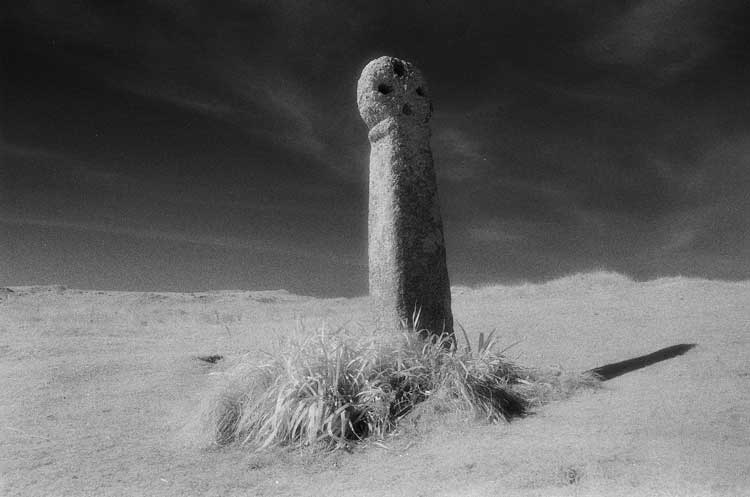 Almost lost amidst the sand dunes of Penhale Sands, this 8 foot high cross is the oldest recorded stone cross in Cornwall.

It was mentioned in a charter of King Edgar in A.D. 960, by which time it was already an old landmark.

The cross commemorates one of the county's patron saints, St Piran, or Perran.

Although his family origins are obscure, it is generally believed that he came to Cornwall from Ireland when some of the native Irish became jealous of his healing powers and of his ability to work miracles.

During an horrendous thunderstorm they tied a millstone around his neck and threw him from a cliff into the sea.

They had, however, underestimated his supernatural abilities, for no sooner had the saint hit the surface than the storm suddenly abated and Piran bobbed back up to the surface.

Waving farewell to Ireland he set course for Cornwall, sailing on the millstone that his would-be executioners had tied around his neck.

It carried him to Cornwall where he came ashore between Newquay and Perranporth, at a spot that is still known as Perran Beach in his memory.

Here he settled into a life of renewed holiness and built himself a small chapel on Penhale sands, where his first disciples are said to have been a badger, a bear and a fox.

St Piran is attributed with discovering tin in Cornwall (although it would be more accurate to say that he re-discovered what the Roman's had previously discovered).

The story goes that he built himself a fireplace from a large black chunk of rock.

As the flames grew hotter he was amazed when a trickle of pure white metal began to ooze out of the stone.

He shared the knowledge of his discovery with the indigenous population who quickly capitalized upon this natural resource and thus was begun the lucrative Cornish tin trade.

As a result his find he is also the patron saint of tin miners, and the seeping white metal, his most enduring legacy to Cornwall, features as the white cross of St Piran that is set against a black background on the Cornish flag.

Inevitably his name has become intertwined with another famous figure from Cornwall's past, King Arthur, and legend has also chosen to remember him as the personal chaplain to the legendary monarch.

A Fondness For Drink

St Piran is said to have been a convivial man who was famed for liking his drink, a fondness that eventually led to his demise, since he is said to have either drunk himself to death or to have fallen into a well whilst under the influence of strong ale.

Either way he had managed to reach the ripe old age of 206 and, so it is claimed, had never lost his youthful appearance, so perhaps his lifestyle shouldn't attract too much censure!

A Place Of Pilgrimage

His feast day is kept on March 5th, and every year thousands of people flock to Cornwall on the nearest Sunday to this date in order join the procession to the site of St Piran's Oratory which now lies buried beneath Penhale Sands.

Today this 6th century cross is the grandest relic in the vicinity where St Piran is said to have come ashore.

It possesses an aura of mystery tinged with melancholy.

The surrounding landscape resonates with an otherworldly feel and it makes for a truly enchanting experience to visit this sea-sprayed spot as the last rays of the day sink beyond the horizon.

It is then a truly magical experience to stand and feel the salt air against your face, as you listen to the rolling waves of the nearby sea, alone with your thoughts as the mysteries of the night engulf you.