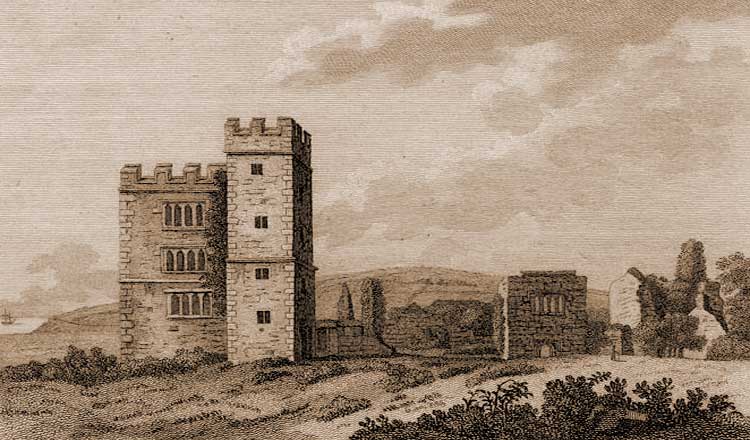 A forlorn aura hangs over the picturesque bulk of Pengersick Castle.

It is a beautiful and magical place, yet there are sections where you sense an indefinable hopelessness, as though some long ago tragedy or dastardly deed is about to be re-enacted before you, and it comes as little surprise to discover that Pengersick (a name which means the head of a marsh place), is one of the most haunted places in Cornwall, if not in the whole of England.

The family who built the castle took their name from its boggy location, and the original owner, Henry Pengersick appears to have been something of a psychopath who made several contributions to the ghostly population of his family home.

Ecclesiastical figures featured high on his hate list, and he was excommunicated for killing a monk from Hailes Abbey in Gloucestershire, who had the audacity to drop by to collect tithes.

Whether the latter is now the spectral monk whose hooded figure wanders the castle and grounds is uncertain, but he has been seen many times, especially around the small forest at the end of the medieval garden.

Assaulting and murdering churchmen aside, Henry Pengersick was also a man with dynastic ambitions, and he chose as his bride the beautiful Engrina Godolphin, a daughter of the family that owned the adjoining estate.

The testosterone-fuelled escapades of her violent husband may well have taken their toll on the gentle Engrina, for her spirit is said roam the old castle, and has a particular affinity for the main bedroom, which s a particularly haunted chamber and is home to at least two other spirits.

In the early hours of some mornings, guests have been startled by the sudden appearance of a ghostly woman who appears by the window.

After a few moments spent gazing pensively out into the night she turns and walks to the Jacobean four-poster bed. Lying down, she suddenly clutches her stomach and begins writhing in agony.

Could she be the earthbound revenant of some long ago resident who was poisoned in the room? Some say she is and claim that that the other female figure, who appears through the wall to stand by her bedside, is the maid that nursed her through her last agonising hours.

Of course, all this is little more than convenient speculation, for only the walls know the truth, and they are not telling.

A Castle Of Secrets

There is no doubt that Pengersick Castle merits a visit from all those seeking ghostly encounters, and many who come here do not leave disappointed.

Whether it be the sight of Alexander, the fearless black cat, chasing spectral rats around the grounds; the white orbs and weird shapes that show up on some pictures but are absent from others taken just seconds later; the demon dog with the fiery red eyes; or even the eerie white mist that writhes towards terrified witnesses; this old place is a castle of secrets where the past and present live side by side, and can merge every so often with alarming results.