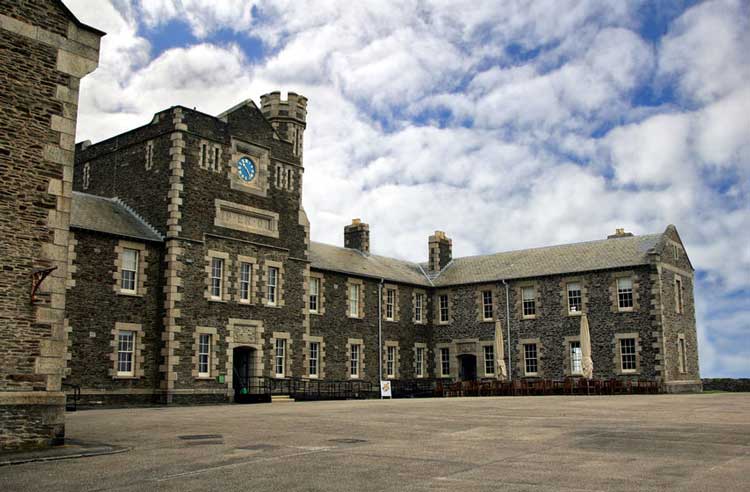 Henry VIII instructed the construction of Pendennis Castle, between 1540 and 1542, as part of the King's Henrician programme, which was intended to thwart any attempts at invasion by the French or the Holy Roman Empire. It was intended to protect the Carrick Roads waterway at the mouth of the River Fal and, it must be said, it certainly made an imposing fortress.

As the threat of a Spanish invasion increased, towards the end of the 16th century, the original circular keep and gun platform were complemented with the addition of a ring of stone ramparts and a bastion.

During the Civil War, the fortress was held by the Royalists, albeit, the Parliamentarians finally managed to seize it, following a long siege, in 1646.

With the renewed threat of a French invasion in the 18th century, Pendennis was modernised and upgraded in the 1730's; and, as the threat increased with the onset of the Napoleonic Wars, it was refortified again in the 1790's.

The castle was pressed into service again during both the first and the second World Wars, following which, having become obsolete, it was decommissioned in 1956.

Eventually coming under the management of English Heritage, the castle is now a popular tourist attraction, and is now invaded annually by over 70,000 eager visitors, who come to marvel at a place that, according to Historic England, is, "one of the finest examples of a post-medieval defensive promontory fort in the country"

The Ghosts Of Pendennis Castle

Several ghosts are said to roam the interior of the impressive former fortress, albeit they tend to confine themselves to being heard, as opposed to being seen.

Phantom, footsteps have been heard plodding up the timeworn, winding, stone of staircases; the piercing screams of "Maud" a ghostly kitchen maid, who reputedly fell to her death at an unspecified time in the castle's past, have been heard by staff and visitors alike; the sound of childish laughter has been heard emanating from dark corners of certain rooms; phantom footsteps, believed to belong to long ago soldiers, are also reported by the psychically attuned; and the ghosts of the a former head cook and a long-ago lieutenant governor complete the varied complement of ghosts that haunt this magnificent and, in parts, spooky fortress.