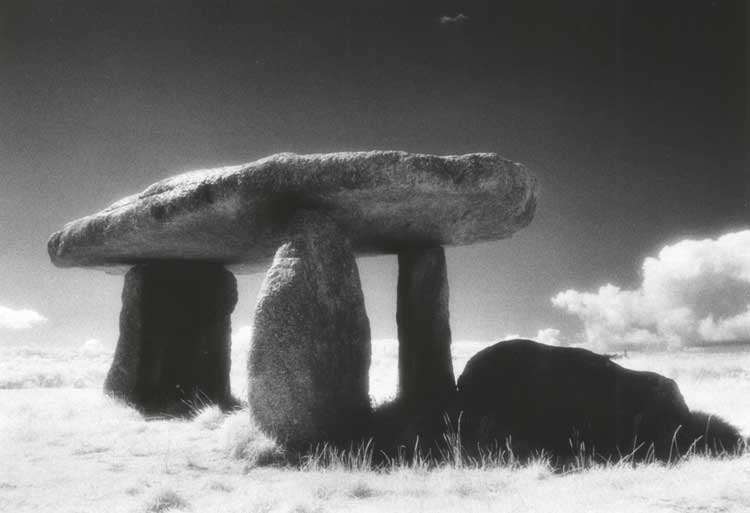 A Shadow Of Its Former Self

This huge and impressive dolmen is now little more than a shadow of its former self.

Indeed, there are accounts from the 18th century claiming that it was then possible to pass beneath the giant capstone on horseback!

But, in 1815, the combined effects of time and the elements proved too much for the ancient monument, and in the course of a fearsome storm, it gave up its defiant stance and, with a weary sigh of resignation, collapsed onto the earth.

The locals, however, were not about to let such a remarkable landmark lie forgotten so - having launched a campaign for the necessary funds - they set about restoring it to its former glory in 1824.

Unfortunately in the course of this restoration they managed to break one of the upright supports and thus it is that the three surviving uprights had to be shortened and squared off before the mighty capstone could be replaced on top of them.

If this indignity was not sufficient to dent to the pride of the ancient survivor, the Quoit was also rotated by ninety degrees with the consequence that it now stands at right angles to its original position.

But even after all this, Lanyon Quoit still manages to retain its dignity and there can be little doubt that, reduced as it is in size, it is still an imposing and awe-inspiring sight.

The capstone is simply huge and measures 5.3 by 2.7m, whilst its weight has been estimated at a remarkable 13.5 tons.

As to its purpose and original usage, it is believed to be the remains of a long barrow or chambered tomb that, it has been estimated, dates from around 2,500BC.

Faint traces of the barrow can still be seen stretching for twenty-seven feet on a roughly south-north axis.

There is a local legend that the bones of a giant were discovered inside the tomb, and this has led to the Quoit's also being known as "The Giant's Table" or "The Giant’s Tomb."

And, not one to be omitted from the folklore that surrounds such an impressive and inspiring landmark, the myth of Arthur swirls, ghost-like, around the site -for tradition maintains that it was here that he enjoyed his last meal before the battle of Camlann.