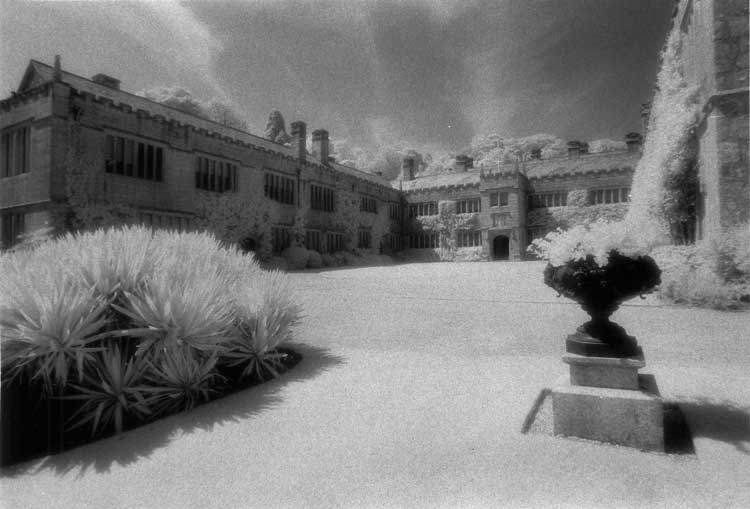 One of the most fascinating late 19th century houses in England, Lanhydroc is a place of rare beauty.

It sits amidst 450 glorious acres of tranquil park and woodland, and is encircled by a lovely garden of rare plants and shrubs.

Its fifty rooms are full of period atmosphere and are crammed with the trappings of a high Victorian country house.

From the simplicity of the Maids Bedrooms, the quaintness of the Nursery Wing, right up to the sheer breathtaking splendour of the Long Gallery, with its beautifully worked plaster ceiling depicting biblical scenes, Lanhydroc is a house that warrants much more than a cursory dalliance.

Lanhydroc House was originally built in 1630 by the immensely wealthy Robartes family successive generations of whom lived there for the next three hundred years.

The grandiose residence that greets visitors today, however, is the result of a 19th century rebuilding following a disastrous fire in 1881, that left only the north wing, entrance porch and gatehouse standing.

Sixty eight year old Lady Robartes was rescued fro the flames by ladder from an upstairs window, but found her ordeal so distressing that she died of shock a few days later.

Lord Robartes was so distraught at the loss of both his wife and the family home that he too died the following year and it was their son, Thomas Charles Robartes, who undertook the rebuilding and also restored the adjoining church in memory of his parents.

The National Trust Takes Over

In 1953 Lanhydroc House was taken over by the National Trust who, along with the usual fixtures, fittings and furnishings, also acquired several resident ghosts into the bargain.

There is the little old lady dressed in grey who has been seen in the Long Gallery and the Drawing Room. Witnesses are never aware that she is anything other than flesh and blood until they approach her, whereupon she vanishes into thin air.

The distinct aroma of cigar smoke is another of the unexplained phenomenon to be experienced at Lanhydroc House.

In addition several staff and visitors have over the years reported seeing or feeling various presences about the property, especially in the Long Gallery, the Nursery Suite, the male and female Servants Quarters, the Prayer Room and the Prayer Room Corridor.

On July 2nd 2004 a team of investigators from the Cornwall based Paranormal Research Organisation were invited to conduct a night time vigil at the house to see if they could shed any light on whether or not the property was haunted and if so by who.

Their President, Ian Addicoat, later reported that the group had achieved some remarkable results during their investigation and enthused about the "sheer amount of activity" they had witnessed.

Several members heard the sound of a young girl giggling in the house's Nursery Suite, whilst others - a journalist from the Cornish Guardian included - heard a sound that resembled "a heavy table or chair being dragged along the wooden floor of the Long Gallery.

It occurred during a séance and appeared to be a response to investigator Mike Tomlinson's asking any spirit present to make itself known in some way. It lasted for around five seconds, was quite loud and appeared to come from the dark recesses at the far end of the Gallery from where the group was sitting in a circle.

Elsewhere, the Paranormal Research Organisation's "biggest self-proclaimed sceptic" was somewhat taken aback when he witnessed a figure in the grounds where a male ghost is believed to walk .

In addition the group made contact with the spirits of several former residents of the house, including a maidservant called Elizabeth Hargreaves, who told them that she had fallen down the stairs in around 1823.

By the time the group came to leave the house all of them had witnessed some form of supernatural activity or inexplicable occurrences, and all agreed that the evening had been extremely worthwhile.