THE LOST KINGDOM OF LYONESSE

When I Set Out For Lyonesse

Charles Dickens claimed that he knew of no experience equal to that of watching a sunset over Land's End, and although the place has changed since his day, it still possesses a magic, which the paraphernalia of the tourist industry does not dispel.

Take a few short steps to the east or the west, and you encounter some of the most awe-inspiring cliff-top scenery in Britain.

Stand here on a still summer day, when a silvery tide fills the myriad coves and inlets beneath, and feelings of genuine enchantment wash over you.

Return to the very same spot when a belligerent westerly is whipping the waves into a foaming frenzy, or a white mist has draped itself over the rugged headland and you sense the awesome majesty and changeable temperament of the place. 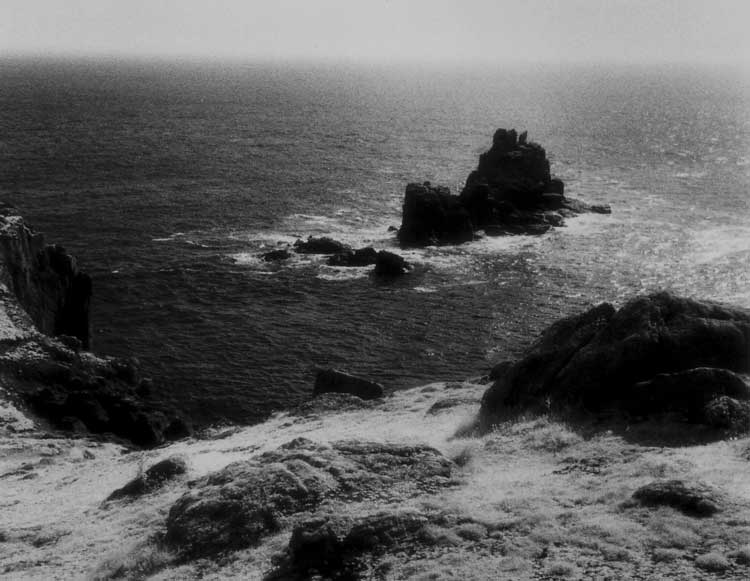 Legend says that a lost kingdom lies beneath the emerald waters that stretch from this jagged coastline to the Isles of Scilly, twenty- eight miles to the west.

It was a fabled land of splendid towns, ripe orchards and a hundred and forty churches.

One of its inhabitants, a man named Trevelyan, became concerned at the, apparently, dangerous in-roads that the sea was making against the land, and moved his family and cattle to higher ground.

His fears proved well founded, for one day a great flood swept over the kingdom drowning everyone except Trevelyan, who having leapt onto his white horse, galloped before the waves and managed to reach the safety of a cliff-cave at Land's End.

In the past, local fishermen are said to have frequently dredged up masonry and panes of ancient glass in their nets, whilst others say that on, storm tossed nights, the bells of the lost land can be heard tolling beneath the waves.

The Arthurian epics claimed that this lost land was the Kingdom of Lyonesse where Tristan, the famed lover of Iseult, was born.

In Tennyson's Idylls of the King, it was in "the sunset bound of Lyonnesse," in the fading light of the winter solstice, that Arthur fought his final battle against Mordred.

A "death white mist slept over sand and sea" causing such confusion that "friend slew friend not knowing whom he slew."

Arthurƍs faithful knights fell around him and then, at twilight, a dead hush fell.

Suddenly, a bitter wind blew the mist aside to reveal Mordred standing amongst the corpses.

Arthur rushed at him but was smitten "hard on that helm which many a heathen sword had beaten thin."

With one last stroke of Excalibur he managed to kill Mordred but then he fell, mortally wounded.