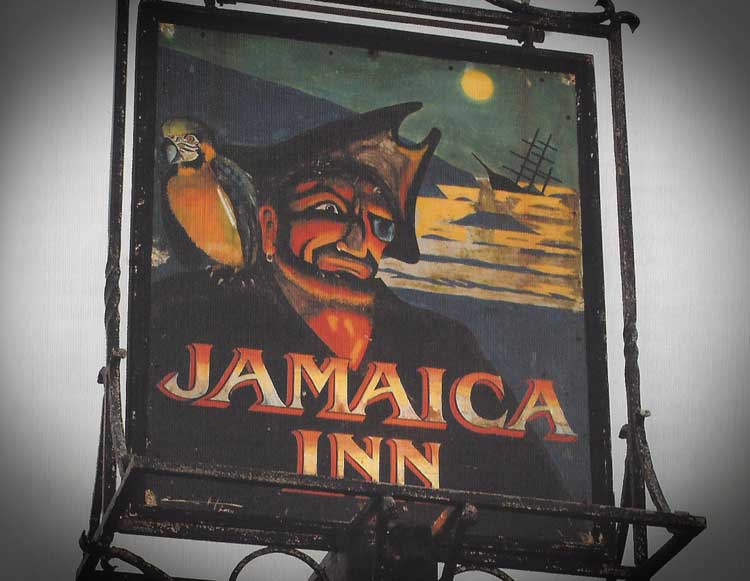 The oldest parts of Jamaica Inn date back to the 18th century, and originally it catered for travellers on the new turnpike road from Bodmin to Launceston.

The name Jamaica Inn came from the local Trelawney family, important landowners in the area, two of whose members served as Governors of Jamaica in the 18th century.

The surrounding countryside was - and still is - wild, rugged and remote - and the inn gave shelter and sustenance to many a traveller whose weary lot it was to traverse the bleak and windswept sedges of Bodmin Moor.

The Jamaica inn's wind-lashed walls also provided a haven for less salubrious characters, and for many years it was a notorious haunt of smugglers.

The publication in 1936 of Daphne du Maurier's classic novel Jamaica Inn made the place famous throughout the world, and led to its expansion into the sprawling tourist complex that greets visitors today.

The Ghosts Of The Inn

Several ghosts are said to wander within and around the Jamaica Inn's old interior.

Phantom footsteps have been heard plodding along corridors at dead of night.

The sound of horses hooves sometimes clatter over the outside courtyard in the early hours. Witnesses, awoken by the phantom hoof beats, part the curtains to investigate and see nothing.

The murmur of agitated conversation in some foreign tongue, or forgotten dialect, has also been heard in the darker corners of otherwise empty rooms.

And, every so often, the inn's best-known and oldest ghost transcends the centuries to astonish and bemuse those who chance upon him.

In life he is reputed to have been a wayfarer, who one evening long ago was supping his ale at the bar, when a man peered round the door and called for him to come outside.

Setting down his half-full tankard, the wayfarer went out into the night, and was never seen alive again. The next morning his lifeless corpse was found on Bodmin Moor.

His identity -and that of his assailant - remains a mystery to this day, but his ghost has appeared many times, and has a particular attraction to the wall in front of the inn.

Here he has often been seen just sitting, silent and motionless.

He doesn't respond to greetings, appears oblivious to those who pass by him, and after a few moments of gazing nonchalantly into space, slowly dissolves into nothingness.