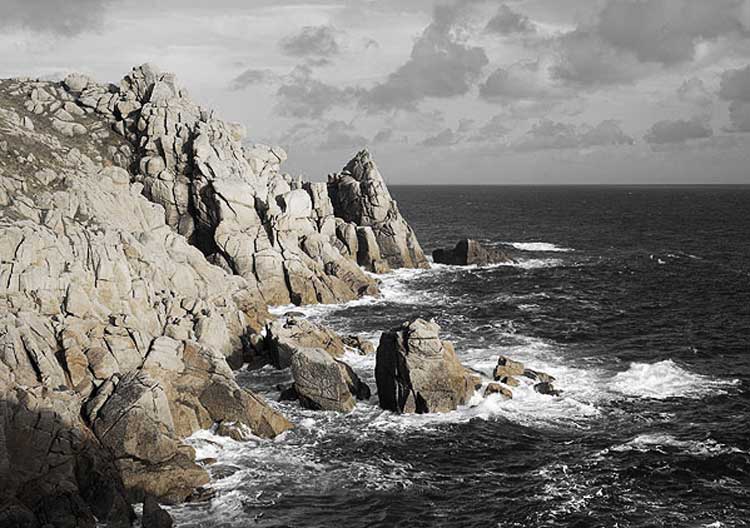 A small path ascends from the tiny hamlet of Porthgwarra, to the South of Landsend, and twists through the bracken to arrive at the windswept cliff top of Hella Point where the bleak desolation of the surroundings set the brooding backdrop for a tragic tale.

The relationship, however, was frowned upon by the girl's parents and they forbade her to meet with him again.

But, shortly before her lover was due to rejoin his ship the two managed a clandestine meeting in the pretty weave lashed cove at Porthgwarra which ever after became known as "Sweethearts Cove."

There the lovers pledged their undying love and vowed to meet again when William returned from his voyage.

Following their tearful Farwell, Nancy would pace the headland around Hella Point gazing out across the wild ocean watching and waiting for her lover's return.

But, as the months rolled by, their came no word of him, and the poor girl sank into a deep depression which soon gave way to insanity.

Day after day she would stand on the windswept and rugged clifftop looking seaward.

Her parents and neighbours could only watch helplessly, unable to help her in any way.

Re-United After All These Years

Then one stormy night an old woman walking along the cliff top glanced down to the cove and saw Nancy sitting on a rock in the cove, the foaming waves breaking around her.

She rushed down to warn her of the rising tide but was surprised as she approached to see a sailor sitting on the rock alongside her.

As she watched, the waves lifted the couple from the rock and carried them out to sea.

Nancy was never seen again and, soon after, word came that at the time the old woman had witnessed the lovers together William's ship had sunk and all on board had drowned.