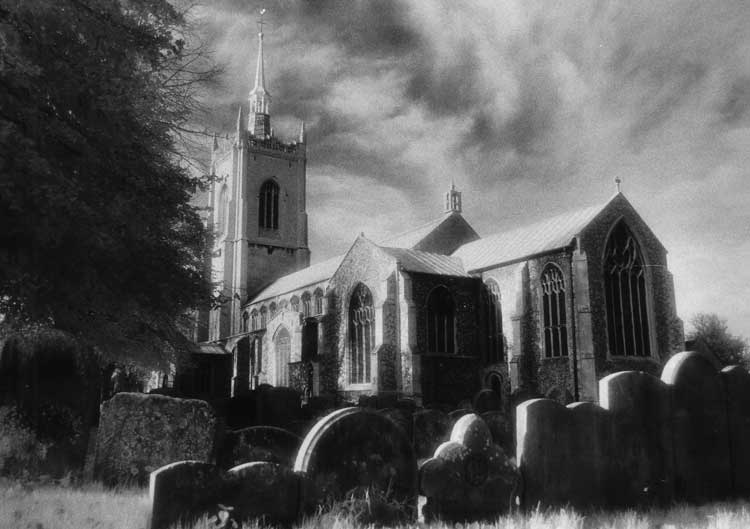 A Roundup Of Norfolk Ghosts And Legends

Blickling Hall was built in the early part of the 17th century for Sir Henry Hobart, although the ghosts that reputedly haunt it are those of the occupants of a previous hall on the site.

It once belonged to Sir Thomas Boleyn, father of the ill-fated Anne Boleyn. It was she who having caught the eye of King Henry V111, became his mistress and ultimately his second Queen, before finding herself accused of treasonable adultery, sexual deviation (with among others her own brother, Lord Rochford) and, worst of all - witchcraft. Sentenced to death by her own uncle, the Duke of Norfolk, she was beheaded on 19th May 1536 by a skilled swordsman specially imported from France for the occasion - her husbands one merciful concession to his fallen Queen.

Her ghost is now one of the busiest in England, but it is here at Blickling on the anniversary of her death, that she makes her most dramatic appearance. Indeed the auspicious date is something of a ghostly family re - union in these parts.

Anne herself appears dressed all in white, seated in a ghostly carriage that is drawn by headless horses, spurred on by a headless coachman.

She too is headless - her severed, dripping head sitting securely in her lap as the ghastly vision careers along the drive of Blickling Hall and upon arrival at the door the coach and driver vanish leaving the headless Queen to glide alone into the hall where she roams the corridors and rooms until daybreak.

Her brother, Lord Rochford, appears on the same night. He too is headless although he doesn't enjoy the comfort of a carriage, for he is dragged across the surrounding countryside by four headless horses.

Not be left out of this unearthly family get together, her father, Sir Thomas Boleyn, has been given a dreadful penance to perform on the anniversary of her death.

Once a year for a thousand years from his death in 1539, he must attempt to drive his spectral coach and horses over twelve bridges that lie between Wroxham and Blickling, the impossibility of his task is made even more difficult by the fact that he carries his head under his arm, which make controlling the horses a difficult task indeed!

A final spirit to haunt Blickling Hall is thought to be that of Sir Henry Hobart, who died of his wounds in the house following a duel in 1698.

It is reported that his dying groans still echo down the centuries from time to time, chilling the blood of all that hear them.

In summer the broad is alive with the laughter and enjoyment of the thousands of pleasure seekers who turn its picturesque waters into a congested tangle of every conceivable type of sailing craft.

In winter, as the cold wins rustle the reeds and the waters so picturesque in the summer have turned to dark and melancholic ice, those who have cause to be in the neighbourhood often gather round blazing log fires, ale in hand and they listen.

The wind may rattle the windows, its mournful whistling howling like a banshee across the rooftops - but every so often there sounds from the depths of the broad the rhythmic tattoo of a distant drum and they nod to one another, knowing that the phantom drummer is once more abroad.

He lived in the early years of the 19th century, a poor drummer boy, who fell in love with the daughter of a rich and influential man.

Knowing that her father would never consent to their marriage they wed in secret. Each night they would meet in a small hut on the edge of Hickling Broad.

In winter when snow blanketed the countryside and the Broad was frozen over, she would come to their humble love nest and await his arrival.

Skating on the frozen ice he would sound his approach by beating on his kettle drum.

Then one night as waited, listening to the beat of her approaching husbands, all went suddenly quiet. The ice had given way and sent her lover to a chilling death deep beneath the frozen broad.

And so it is that on winter nights when people stay huddled indoors, their windows bolted tight against the winter winds, that the rhythmic tattoo of a ghostly drum sounds across the broad and the phantom drummer resumes his eternal search for the girl whose heart he won but whose spirit he lost long ago.

Family seat of the Marquess of Townshend, Raynham Hall is also home to the "Brown Lady," who is thought to be the ghost of Dorothy Walpole, sister of the Statesman Sir Robert Walpole, whose husband Lord Charles Townshend imprisoned her in her quarters at the hall when he discovered that she had had an affair with the rakish Lord Wharton.

Crestfallen she either wasted away until her death in 1726, her suffered a mysterious, not to say suspicious, tumble down the grand staircase where she broke her neck.

Her ghost has become a classic of English haunting with its strangely illuminated face from with dark hollows instead of eyes.

The novelist Captain Maryatt encountered her in a corridor one night when he was staying at the hall. She "glanced at him in the most diabolical manner" upon which he drew his pistol and shot her. The bullet passed straight through the phantom and was later discovered embedded in a door.

A Country Life photographer even succeeded in taking a photograph of the ghost in 1936 which continues to baffle experts who can find no evidence of trickery or fakery.

The imposing Norman castle was built in 1150 onto ramparts that had probably been constructed by the Romans.

In 1330 Edward 111 sent his mother Queen Isabella to live here in unofficial imprisonment for her part in the savage murder of her husband Edward 11.

She lived in relative comfort to begin with.

But then "the She Wolfs" mind gave way and she degenerated into insanity and became gibbering, screaming, cackling wreck.

Although she drew her last tortured breath here over 600 years ago her raucous cackle and maniacal ghostly laughter are still heard echoing from a room on the upper levels of the Castle and they are loud enough to send a cold chill racing down the spine of those who happen to hear them.