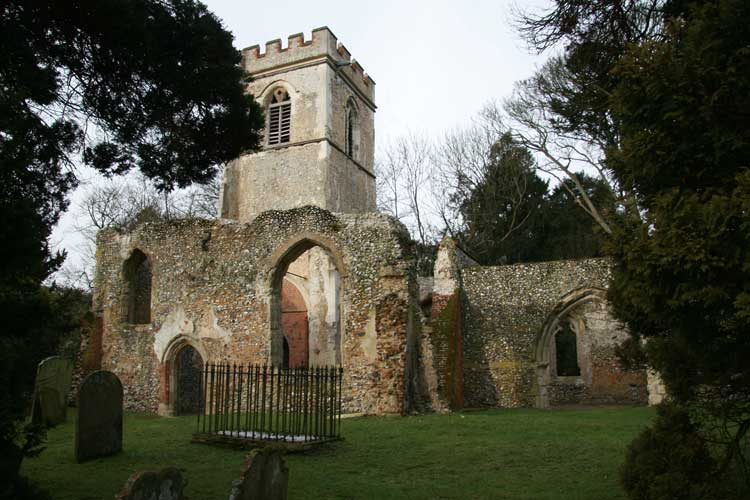 A Selection Of Hertfordshire Ghost Stories

Hidden from view by a wooded copse, and reached by a brisk walk along a muddy bridleway, the crumbling remnants of Minsden chapel have tottered on the edge of ruin for at least three hundred years.

Built in the 14th century as a chapel of ease for pilgrims en route to St Albans Abbey, it had fallen into disrepair by the mid-17th century, when its secluded woodland setting made it a favoured and romantic location for weddings.

Unfortunately, as Mary Horn was plighting her troth to Enoch West in 1738, a lump of masonry suddenly dislodged itself from the roof and fell earthwards, knocking the prayer book from the priests' hand.

The power's that were decided that enough was enough, and the chapel was abandoned. It has remained little more than a melancholic ruin ever since.

In the early 20th century it became indelibly linked with the Hertfordshire historian Reginald Hine, whose fondness for the what was left of the chapel, led to his leasing it from the church for his lifetime.

He issued a dire warning to "trespassers and sacrilegious persons" that he would "proceed against them with the utmost rigour of the law and after my death and burial, I will endeavour in all ghostly ways to protect and haunt its hallowed walls."

Following his death in 1949 he was buried here and his cracked tombstone now rests beneath a lush carpet of weed and nettle.

Unsurprisingly, the crumbling edifice is haunted, its ghost being that of a phantom monk who appears on Halloween at midnight and ascends a long vanished flight of stairs at the chapel's North East corner.

His appearance is always preceded by a mysterious tolling of Minsden's lost bells and his passage marked by the eerie, though solemn, sound of plaintive music.

Perched on a slight incline, the squat church of flint and brick is not overly impressive. It is ringed by a peaceful churchyard, where rests the body of a heretic whose grave is surrounded by a wrought iron fence and whose heresy is remembered by the bizarre fulfilment of a death bed prophesy.

Her name was Lady Anne Grimston and in life she was a staunch atheist. As she lay upon her deathbed, in November 1780, she ignored the vicar's entreaties to recant her blasphemy, and she point blank refused to allow him to administer the last rites. "If there is any truth in the teachings of the bible, "she is said to have sneered, "then seven trees will sprout from my grave."

Her body was laid to rest in St Peter's churchyard where, either by the hand of fate, or by the machinations of an opportunist clergyman, several trees have, indeed, sprouted through her tomb, lifting it slightly and dumping great chunks of moss-clad masonry onto the carpet of nettle and bramble, beneath which her mortal remains now lie.

Close to the churches gateway, there stand two stones that mark the reputed grave of the fabled local giant, Jack O’Legs.

He is said to have lived during the Middle Ages and was supposed to have been so tall that he could lean on first-floor window sills and chat with occupants inside the houses.

He was also renowned for his prowess as an archer, possessing the ability to bring down a bird from half a mile away and to shoot an arrow for over three miles.

But it was for his nefarious activities as a highway robber that he was best known and, like many an outlaw before and since, he was famed for robbing the rich to give to the poor.

Indeed, he held up so many wealthy travellers on the old Great North Road, that a steep incline close to the village of Graveley is still called "Jack's Hill" in commemoration.

It was, however, the rich bakers in the market town of Baldock that, due to their practice of giving short measures, he was wont to harass the most.

But, eventually, they grew tired of Jack's charitable escapades at their expense, and banded together to rid themselves of him once and for all.

One day, as he was striding through Baldock, he was hit from behind with a heavy pole. Having bound him in chains, the bakers dragged Jack to nearby Gibbet Hill, where they put out his eyes with a red-hot spit.

Jack begged to be allowed to fire his bow one last time and asked that his body be buried where the arrow fell.

The bakers consented to his final request and watched his arrow fly for two miles, before it struck the spire of Holy Trinity Church in Weston and fell into the churchyard.

It was here that, following his execution, they laid him to rest and marked his grave with the two ancient stones, twelve feet apart, which are still said to stand over the mortal remains of the legendary giant Jack O'Legs.