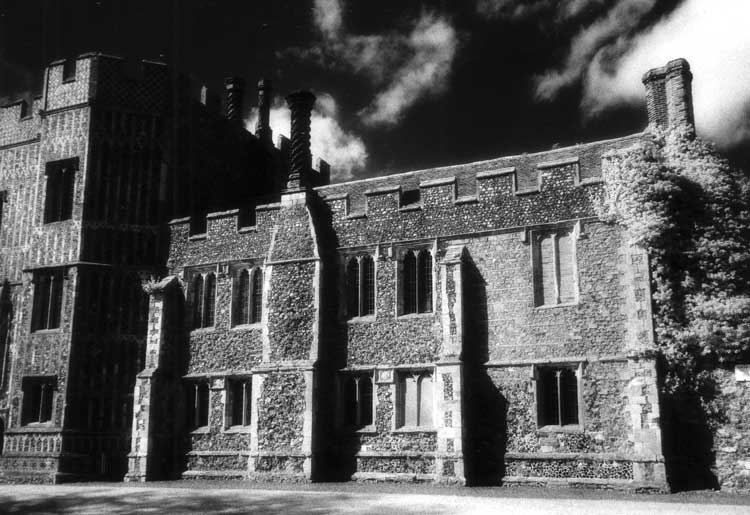 A Selection Of Essex Ghost Stories

The church tower, built buy Henry V to celebrate his victory at Agincourt, rises majestically above a bleak expanse of wide open countryside.

The churchyard, with its scattered, leaning gravestones and dense vegetation, possesses a strangely subdued atmosphere.

It is haunted by an old hag, who was long ago executed for witchcraft and who now returns on Hallowe'en much to the consternation of the Essex Constabulary who cordon off surrounding roads to prevent the hordes of ghost hunters who have been known to make pilgrimages here on the night of nights.

Canewdown was once renowned for its witches, and any woman seeking membership of the sinister sisterhood, must dance round the church twelve times at midnight, whereupon the devil will appear to perform the necessary initiation.

Charlie Wilson was Ostler at this 400 year old inn during the closing years of the 19th century. A small man, whose strange sideways walk earned him the nickname "Spider," he had the peculiar habit, when drunk, of crawling up the tap- room chimney and emerging, soot covered, from the fireplace of the next bar.

One Christmas Eve, however, he decided not to come down and just sat in a bacon curing loft at the junction of the two chimneys, ignoring the entreaties to descend.

Exasperated they lit a small fire in the grate, the smoke from which unfortunately suffocated old "Spider," whose well cured remains are supposedly still up there today!

His ghost, though, often descends at night. Dressed in white breeches and shiny leather boots, he does no harm, and is content to flit about the nooks and shadowy recesses of this timeless and little changed old inn.

The magnificent priory building, dating largely from the 12th century, is the most imposing monastic foundation to survive in Essex.

St Osyth was a 7th century East Anglian Queen, beheaded in nearby "Nuns Wood" by Danish invaders, when she refused to renounce her faith.

Her executioners were astonished when she picked up her head and, holding it at arms length, walked to the village church, where she knocked several times on the door before slumping to the ground.

Legend holds that every October 7th her ghost repeats the miraculous feat, and can be seen in the churchyard at midnight, holding her severed head.

"...the foulest of foul parasites, an obscene bird of prey.." and whose fanaticism made his name "stink in men's nostrils."

Claiming to possess "The Devil's Own List" of every witch in the kingdom, Hopkins scoured the county imprisoning and torturing his unfortunate victims till they confessed to any number of heinous crimes. From 1645 - 1647 he was responsible for 74 executions, whilst a further 36 people died in gaol awaiting trial.

He profited immensely from his work, demanding a fee for every witch he brought to justice, and making the equivalent of £100,000 from his activities.

He died in 1647, but the evil he perpetrated in life has apparently prevented his spirit from resting, for his ghostly figure has been seen at the inn on several occasions.

The paranormal investigator Harry Price dubbed the old rectory "The Most Haunted House in England" and claimed that over two hundred ghosts resided within its sturdy Victorian walls.

Although the house burnt down in 1939, the church and its surrounds are still eerie and many visitors report a sudden feeling of foreboding that grips them the moment they set foot in the neat, though seemingly neglected little churchyard.

And, some would say, with good reason, for ghostly organ music has often been heard wailing from inside the empty church. Investigators have tape-recorded phantom footsteps, mysterious tapping, and even a harsh, menacing cry that has terrified those who have heard it.

Many photographs taken of the church exterior have been found to include ghostly forms gliding amongst the sunken graves or along the uneven paths of what is still one of England's eeriest and marrow - chilling places.