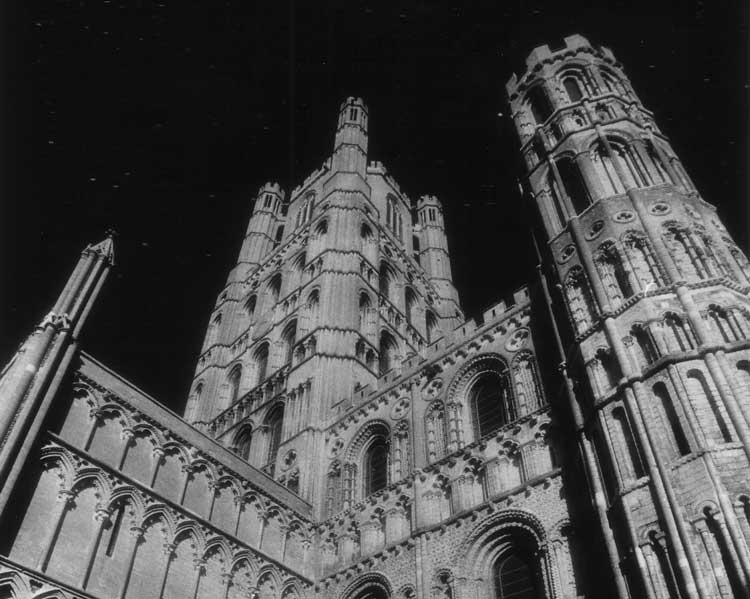 As the London-bound express trains thunder at ever increasing speeds past the Cambridgeshire village of Connington, they race over a tiny crossing, which a series of tragic accidents have endowed with such a sinister reputation, that it has been branded "the crossing of death."

In the 1940's six German prisoners-of-war, were killed here when a light engine ploughed into the lorry in which they were travelling, early one foggy Monday morning.

On 16th October 1948 Colonel A.H. Mellows was driving his black Chrysler car towards the crossing at around 5.30pm. His passenger, Mr A.F. Percival, got out of the car to open the gates. The colonel edged his car forward and drove straight into the path of a London-bound express. The train ploughed into his car, killing both he and his dog instantly.

Colonel Mellows was buried with full Civic honours and his dog was subsequently laid to rest alongside the stretch of line where the accident had occurred.

Needless to say with such a dreadful reputation the crossing had soon acquired a reputation for being haunted.

Signalmen, who were assigned the box at Connington, would often hear the sound of locked gates apparently being opened and closed. Sometimes they would catch ephemeral glimpses of a large black car approaching the crossing, which would have disappeared by the time they arrived to open the gates.

The aptly named Mr Norman Jinks, who was in charge of the signal box throughout the 1960s, frequently heard the distinctive sound of ghostly tyres crunching across the gravel although no car was ever visible.

The signal box was removed in the 1970's, ostensibly for technical rather than supernatural reasons. But people still avoid the "crossing of death" when nighttimes lengthening shadows stretch across the remote and windswept fens.

An isolated setting on the leafy banks of the Great Ouse, a thatched roof over ancient oak beams beneath which massive Inglenook fireplaces blaze a warm welcome, combine to make the Old Ferry Boat one of Cambridgeshire's most atmospheric inns.

Its stone floor is now hidden beneath a plush carpet. Except, that is, one rectangular slab of ancient granite which they would never dare cover, for beneath it are said to rest the mortal remains of Juliet Tewslie. Neglected by her lover, Tom, the inconsolable girl is said to of hanged herself on March 17th in about the year 1078.

On finding Juliet swinging from the branches of the very oak beneath whose leafy boughs they had come a courting in happier days, her grief stricken lover cut her down and cradled the lifeless body in his arms.

Having said his last sorrowful and poignant farewell, he buried her where she had died and marked the spot with the granite stone over which the picturesque old inn now stands.

But Juliet does not rest in peace, for every year on the anniversary of her tragic demise, her ghost is said to rise at midnight, and float about the old rooms of the old inn, until the last knell of the midnight bell calls her back to the grave, where she disappears to sleep in peace for another year.

Such is her posthumous fame that March 17th is THE night at The Old Ferry Boat.

The night when ghost hunters and the just plain curious come flocking in their thousands to greet the appearance of the poor girl whose tragic end, and subsequent nocturnal jaunts, have helped make her one of Cambridgeshire's most abiding annual fixtures.

Although private, and extremely difficult to find, enough of the castle can be seen from the road outside to make the search worthwhile.

This moated, turreted little fortress, with its old battlements, round towers and mysterious dark windows was once the home of Dr Michael Hudson the trusted Chaplain to King Charles 1st.

During the Civil war he and his fellow Royalists fought dauntlessly against the Parliamentarian forces, but were gradually forced to retreat to the safety of Woodcroft, where they were besieged.

Promised safe passage, they eventually surrendered only to find the promises of safety broken when the Roundheads resumed the assault upon being admitted to the castle.

Hudson was chased to the battlements and forced over the edge where he clung desperately by his fingertips, until his attackers chopped off his fingers and sent him plummeting into the moat.

Still alive he attempted to scramble out but was struck by several musket butts, then dragged out and his tongue cut out "and sent around the country in trophy."

His screams are still heard echoing from the battlements at night, his anguished and agonised voice crying "MERCY, MERCY"; is often accompanied by the sounds of swords as the long dead participants repeat their phantom siege over and over again.

Primitive and mysterious, Wicken Fen has changed little since the days when Hereward the Wake roamed its marshy expanse, battling against the Norman invaders.

At night, its wild avenues of beech and rowan tower over beds of giant reeds through which the breeze whispers eerily, and where the sudden movement of a tiny mammal is easily mistaken for the advance of something far more sinister.

Strange, twisting shades of Roman legionaries, perhaps? For they have been known to materialise before startled witnesses and then melt back just as suddenly into the silent shadows.

Battles fought long ago are still repeated by phantom armies that are heard though never seen.

A sinister black dog wades through the dark waters its eyes fixed on an unseen prey.

But the most feared of all the spectres that roam this brooding wilderness, are the "lantern men."

These strange lights that dance and twist their way over the dark surface of the great mere or skip erratically in and out of the reeds, are said to be evil spirits whose sole intent is to lure unsuspecting mortals to a hideous death and a watery grave deep within their marshy domain.