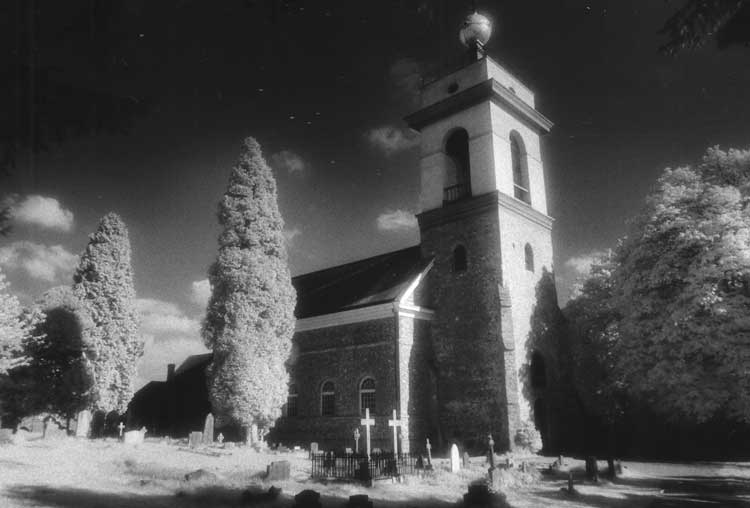 A Selection Of Buckinghamshire Hauntings

One of West Wycombe's most infamous sons was Sir Francis Dashwood, who was responsible for excavating the nearby West Wycombe caves for the debauched cavorting of the notorious "Hell Fire Club," a group of fellow aristocrats and men of influence. Men from the village employed in the construction of the caves were thus saved from the crushing poverty of their age, thus earning Dashwood the gratitude of the locals and ensuring that they were willing to turn a blind eye to the spurious goings-on beneath the hillside.

The village today is a delightful enclave, owned and preserved by the National Trust, and a stroll along its High Street is like slipping back in time.

The red-brick facade of The George and Dragon is one of the village's more striking exteriors, and turning under its archway to enter its snug and atmospheric interior is a rare treat. "Generations of traders, travellers, lovers and visitors have left traces of their presence on the building and its atmosphere," reads the inn' s brochure, "not least of whom is Sukie, the beautiful social climber whose ghost is said to haunt the building."

Tradition holds that Sukie was a servant girl who worked at The George and Dragon in the 18th century.

Among her many admirers were three boys from the village, whose advances she rejected since she had set her sights on becoming the mistress of an aristocrat.

One day a wealthy young man paid a visit to the inn and Sukie, seeing him as her meal ticket out of there, promptly set about ensnaring him.

Soon the handsome young buck was besotted with the beautiful servant girl and began paying daily visits to the inn.

This irked the three local lads, who hatched a cunning plan to teach the haughty temptress a lesson. They sent her a letter, which purported to come from her noble suitor, informing her that he wished to elope with her. She was, he instructed, to don a white dress and meet him that night in the West Wycombe caves.

Elated, the unsuspecting Sukie dressed accordingly and set of for her rendezvous. Arriving at the mouth of the caves she lit a flaming torch and set off into the labyrinth. Hidden behind a large rock, the spurned lads watched with anticipation a she approached. Just as she had passed by, they seized the torch and dashed it to the ground, extinguishing its flame.

Sukie was terrified and fled into the darkness with her whooping tormentors in hot pursuit.

It was then that the prank turned to tragedy. As the frightened girl turned a corner, she tripped over a rock and her head struck the cave wall, knocking her unconscious.

The three lads summoned help and the villagers arrived to carry the comatose girl back to her room at The George and Dragon.

A doctor was called, but in the early hours of the next morning the poor girl died.

It wasn't long before reports were circulating that Sukie' s restless wraith was haunting The George and Dragon. The two maids who shared her room were visited by her just a few days after her demise and refused point-blank to set foot in the inn again.

Over the succeeding centuries there were frequent reports of a ghostly white lady seen drifting about The George and Dragon in the early hours of the morning.

In 1966 Mr Jhan Robbins, an American guest staying at the hotel, awoke one night to find 'a pinpoint of light glowing about three feet off the ground near the door.' He watched as the light began to grow in stature and took on an 'opaque pearly quality.' Flinging back the covers he leapt out of bed and strode resolutely towards it. Suddenly he 'entered a zone of intense cold' ; his arms and legs became heavy, and he was overcome by a feeling of utter despondency. 'Life seemed futile, beset by tragedy. Life must have felt like this for poor Sukie, I thought, no one to protect her dignity. 'At this realization the light ballooned forward and seemed to reach for me.' This proved too much for the, until then, fearless Mr Robbins. He jumped straight back into bed and turned on the light.

Sukie is the best attested of The George and Dragon's ghosts, but she is not alone. Heavy footsteps are often heard descending the main staircase, believed to belong to a traveller who was murdered at the inn in the 18th century. His name and the circumstances behind his demise have long since been forgotten, and only the onerous plodding now testifies to the event.

Other female phantoms have been seen at various locations around the inn, but Sukie' s story and her subsequent nefarious ramblings puts them all in the shade.

The Nefarious Goings On Of The Hell Fire Club. West Wycombe is a delightful, though tiny, village, comprised of a single high street of timber and flint buildings, on the outskirts of which sits the magnificent seat of the Dashwood family, the beautifully Palladian West Wycombe Park.

On the summit of the steep conical hill across the road from the house, is the immense Dashwood Mausoleum, behind which towers the strange golden ball that sits uneasily atop the church of St Lawrence.

Meanwhile, hewn out of the hillside beneath are a series of caves which are reached via an entrance that has been fashioned to resemble a gothic church and which adds to the overall ambience of eccentricity with which the overall estate seems imbued.

The person responsible for all this was Sir Francis Dashwood (1708-1781), a man whose name has become a byword for hedonistic debauchery, and who is today best remembered as a leading light in the most infamous of all the so-called "Hell Fire" clubs.

These secret societies had become popular with wealthy young aristocrats in the first half of the 18th century and in 1721 it was considered to necessary to pass a Royal edict condemning "Young People who meet together in the most impious and blasphemous manner.. and corrupt the minds and morals of one another."

Ironically, Dashwood's organisation, which is now perhaps the only one to be universally remembered, and which operated between the 1740's and 1760s, never actually called itself the "Hell-Fire-Club", preferring instead to be known as the "Knights of St Francis".

John Wilkes (1725 - 1797), the radical politician, and an enthusiastic member, described their gatherings as "A set of worthy, jolly fellows, happy disciples of Venus and Bacchus, got together to celebrate women in wine."

Although their early meetings probably took place at the homes of various members, including West Wycombe Park, Sir Francis began casting around for a base that would provide the necessary seclusion for the clubs activities.

He settled on the ruins of the old Cistercian abbey at Medmenham, six miles from West Wycombe, which he restored to opulent splendour and inscribed above archway over the entrance the clubs motto Fay ce que voudras (Do as you wish).

Thereafter the society would also be known as "The Monks of Medmenham."

Despite the fact that these self -styled monks certainly indulged in a goodly amount of sexual frolicking, and did include mock religious services in their rituals, there is no evidence to suggest that, as has been frequently claimed, they ever practiced Satanism. The rumour that they did, was probably begun by their enemies in the late 18th Century, and gathered momentum throughout the 19th and 20th Centuries.

There is, however, a delightful, though spurious, tale that at one of the meetings, John Wilkes concealed a baboon, which he had dressed as the Devil, in a chest beneath his seat.

At an appropriate moment, he jerked a cord which opened the chest and the creature jumped onto Lord Sandwiches shoulders who, believing that he had conjured up the Devil, cried out "Spare me gracious Devil: spare a wretch who never was sincerely your servant. I sinned only from vanity of being in the fashion; thou knowest I never have been half so wicked as I pretended: never have been able to commit the thousandth part of the vices which I boasted of…"

The animosity felt by Lord Sandwich for John Wilkes would lead him to pursue a vendetta against him that would see Wilkes expelled from the House of Commons and ultimately lead to his being jailed for three years.

At the height of the Wilkes scandal, Sandwich is supposed to have exclaimed at him, "Upon my soul Wilkes, I don't know whether you'll die upon the gallows or of the pox." "That depends, my lord," replied Wilkes, "on whether I first embrace your Lordships principles or your Lordships mistresses."

But their feud also dragged in other members, including Sir Francis himself, and, by 1766, he had effectively disbanded the "Knights of St Francis" and, thereafter, they would be nothing more than a vague, albeit infamous memory around whom all manner of salacious gossip would gather.

The ghost of a former owner, Sir Edmund Verney - Royalist standard-bearer at the battle of Edgehill in 1642 - is said to haunt this delightful and exquisite house.

As he fought boldly for his King, he was captured by Cromwell's troops and ordered to surrender the colours. This he refused to do, observing bravely that, "My life is my own but my standard is the King's." They killed him there and then. But, when the troops attempted to seize the standard, they found that his fingers could not be prised from around it, and so they hacked off his hand.

As the battle progressed the Royalists recaptured the banner and found the determined hand still clasped around it.

Sir Edmund's body was never recovered, but his hand together with its identifying signet ring, were both sent back to Claydon, where the hand was interred inside the family vault.

Sir Edmund's ghost has haunted the building ever since on an eternal quest to be re-united with his missing body part. His tormented wraith, resplendent in 17th century costume, has been seen pacing fitfully along corridors, or standing dolefully on the stairs a look of total dismay etched upon his face as he continues his search for the hand that he lost to loyalty.