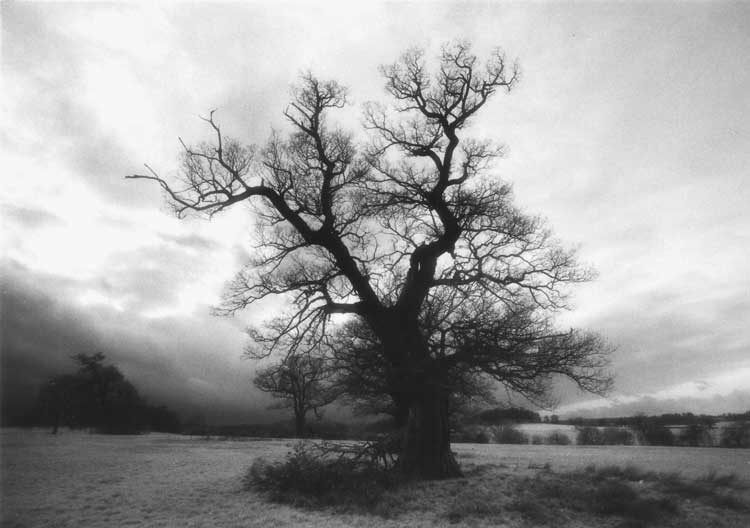 Donnington Castle's towering gatehouse, standing on a high spur and overlooking the old London to Bath road, is an awesome edifice that still commands the attention much as it has done since its construction in 1386.

Built by Richard de Abberbury, chamberlain to Richard II's Queen, Anne of Bohemia, its most eventful period was during the English Civil War, when Charles 1st seized it from its then owner, John Packer, and appointed John Boys as commander of the garrison.

In July 1644 the Parliamentarian General Middleton arrived with 3000 men and demanded that the garrison surrender.

When Boys refused, Middleton launched an ill-conceived siege that not only failed to break through the castle's defences, but also cost him a tenth of his force.

In September, a new force under a new commander loosed a twelve-day volley of cannon fire at the walls. Three of the castle's flanking towers were blown to smithereens and the curtain wall was breeched, but still the valiant Boys refused to surrender.

A month later the Parliamentarians tried again and bombarded the castle with more than a thousand shots.

But when they sent word demanding that Boys submit, they received his customary short shrift.

Then, word arrived that Charles 1st was on his way to relieve the defenders and the attackers retreated.

The exhausted garrison were duly re-provisioned and were able to enjoy a brief respite from hostilities.

When the second Battle of Newbury on 28th October 1644, ended in stalemate, another assault on the Castle led by Sir William Waller ensued.

Once more the demands for surrender were met with an emphatic "no" from the gallant Boys, and a week later a Royalist force commanded by Prince Rupert managed to relieve the garrison.

Colonel Boys used the respite afforded by the winter months to strengthen his defences and was once more prepared to continue his valiant stand.

But the Civil War was drawing to a close and when, in March 1646, the Parliamentarians again demanded his surrender, he sought the Kings instructions and was told to shift for himself and get the best terms he could.

On the 1st April 1646 having withstood almost twenty months of constant siege, John Boys surrendered to his adversaries.

Parliament then voted for the demolition of this symbol of valiant resistance, and today all that remains are the twin towers of the mighty gatehouse that rise from the grassy hillside to a commanding 65 feet.

Needles to say, such a turbulent history has resulted in several ghosts.

There are persistent reports of spectral white dog that comes bounding down the hill from the castle towards the woods below. The creature makes no sound and the first intimation that he is anything more than living flesh and blood, is when he suddenly vanishes into thin air.

A ghostly guard has also been seen around the gatehouse. Whether he is the shade of one of the castle's Civil War defenders is unknown, since he never stays around long enough for witnesses to ask him! One minute he'll be standing by the gatehouse, a solid and apparently human figure, next he will suddenly disappear, as one witness put it, "like a bubble bursting."

The building and grounds are now home to the National Sports Centre and are used, among other things, as the training ground for the English football squad who would, no doubt, benefit greatly from the managerial skills of the scholarly ghost that haunts Bisham Abbey.

Her name was Dame Elizabeth Hoby, and her sombre effigy can still be seen at nearby All Saints Church.

In life, this formidable lady was a brilliant scholar, fluent in Greek and Latin and an enthusiastic composer of religious treatises.

She had high hopes for her son William. But the boy lacked any enthusiasm for his studies and, worse still, turned out a poor scholar with little aptitude for the languages in which his mother excelled. He would often, literally, blot his copybooks and send his tyrannical mother into fits of incandescent rage, during which she would beat the poor boy mercilessly.

One day, following a particularly poor learning session, young William Hoby's slovenly behaviour pushed his mothers self-control to the limits and, in order to teach him a firm lesson, she administered a severe beating, and then locked him in a dark closet.

Unfortunately, she was then summoned to London by Queen Elizabeth 1st and, before she left, forgot to tell the servants of William's whereabouts.

By the time she returned two days later, the boy had starved to death and Dame Elizabeth's eternal fate was sealed.

She died in 1609, a penitent and wretched old lady and her ghost has walked the abbey and grounds ever since.

Ponderous footsteps have been heard shuffling along corridors at night and these are occasionally accompanied by the sound of remorseful weeping.

But most alarming of all, must be the appearance of her mournful wraith, which has been described as like a photographic negative with black face and hands but in a white dress. She glides around the building eternally washing blood from her hands in a basin of water that floats in front of her "without visible means of support".

This atmospheric old inn stands in the ancient village of Colnbrook and was once an important stopover, on the main stagecoach route that ran from London to Bath.

Not wishing to enter the fracas of the endless battle to proclaim itself the oldest pub in England, The Ostrich plays it safe and claims to be the "fourth oldest" and records of the inn certainly date as far back as 1165.

One thing it can certainly claim, however, is that it was the first pub in England to ever be featured in a novel, Thomas of Reading, written in the late 16th century by Thomas Deloney.

It was Deloney's reporting of the nefarious exploits of a former landlord called Jarman that secured the Ostrich's place in Berkshire legend.

His infamous crimes are generally thought to have taken place at some time around the 1300's.

In those days, wealthy travellers would pause at the inn to change from their mud-spattered clothes, into the finery expected for their appearances before the monarch at nearby Windsor Castle.

Many of these wayfarers would often carry vast sums of money with them, a fact that didn't go unnoticed by Jarman who had soon devised a profitable and intricate method of relieving them of both their riches and their lives.

Whenever a seemingly affluent patron arrived at his inn, Jarman would waste no time in plying the stranger with strong drink.

Having arranged for these special guests to sleep in his "best room," he would give them time to collapse into bed and, once he was sure that they were fast asleep, he would undo two bolts on the ceiling in the room beneath. This would cause their bed to tilt downwards at a 45 angle, sending the insensible sleeper tumbling into a vat of boiling fat, that Jarman always kept ready in the room below.

He would then steal the person's belongings; sell his horse and clothes to the unquestioning gypsies, and dispose of the body into the nearby river.

He seems to have profited immensely from his activities and to have escaped any suspicion for many years.

But then one night a suitably drunk stranger had crawled into the bed, when the amount of alcohol he had consumed, forced him to climb straight back out and make use of the rooms chamber pot.

As he answered the call, he was astonished to see the head of his bed, suddenly tilt and disappear into the floor. His terrified shouts roused the other guests, and Jarman's murderous career was over.

On the gallows, he boasted of having killed more than sixty people, although the actual believed total is closer to fifteen.

Staff at the inn, where a decidedly old world charm still holds sway, are often troubled by the "sinister atmospheres" that seem to hang over certain sections, and several landlords have complained of their night-times repose being rudely disturbed by the eerie sound of creaking boards, ghostly sighs and spectral bumps, that are simply attributed to one of Jarman's long ago victims.