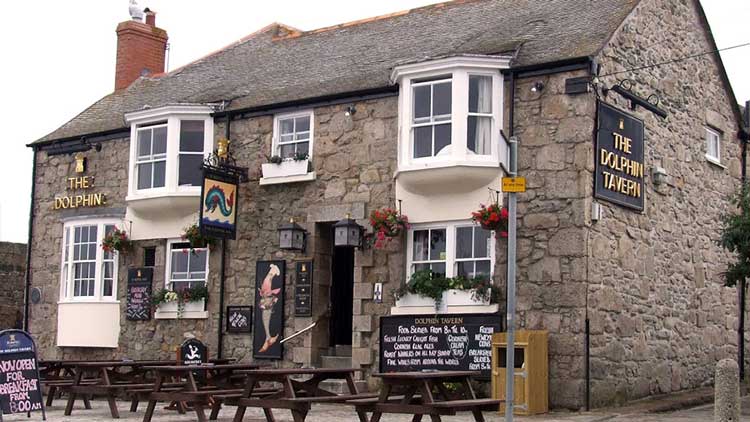 The Salty Banter Of Seafarers

The Dolphin Inn has echoed to the salty banter of the seafaring fraternity for nigh on 500 years.

It is said that the great Elizabethan sailor, Sir John Hawkins, used it as his base to recruit and organize the Cornish fleet that fought the Spanish Armada in the late 16th century.

Later, tradition maintains, the plumes from the first tobacco to be smoked in England wafted amongst its rafters.

Later still the psychopathic Judge Jeffreys is reputed to have turned The Dolphin's dining room into a courtroom, and its cellar into a jail - when he came west to mete out savage retribution against those who had supported the Duke of Monmouth's ill-fated attempt to wrest the throne of England from James II in 1685.

The inn's proximity to the ocean led to frequent flooding over the years - a problem that was solved in the mid 19th century when the massive grey sea walls that tower above it were built.

It was about this time that the then proprietor, William Pascoe, was fined for refusing to billet soldiers at The Dolphin.

His successor, Mr Patch, was not so choosy about his clientele and, in 1868, found himself hauled up before the authorities for harbouring lewd and loose women on the premises.

But by the early 20th century the hostelry had settled into respectable old age, and was a favoured stopover for the gentry awaiting the ships that would depart from the harbour opposite, bound for the nearby Isles of Scilly.

The Ghosts At The Dolphin

At least three ghosts are known to reside within The Dolphin's history-steeped walls.

The most persistent is that of an old sea captain who wears a tri-cornered hat, lace ruffles and a striking jacket, resplendent with shiny brass buttons.

Successive landlords have come to know him as George, and have been happy to allow him to continue his nefarious wanderings until he tires of plodding about the upstairs rooms and corridors in the dead of night.

Another ghost is that of a woman in Victorian dress, who flits across the main bar in front of startled onlookers.

One Sunday morning in October 2000 a member of staff was sitting at the bar awaiting the start of the busy lunchtime session, when the ghost suddenly materialized from the wall beside him and drifted across to the opposite wall, where she simply melted into the stonework.

The final phantom is that of a fair-haired young man. Over the years several landlords and landladies have awoken to find him standing by, or even sitting on, the bottom of their beds.

No one has ever discovered his identity, for he has the annoying habit of simply drifting away the moment anyone speaks to him.