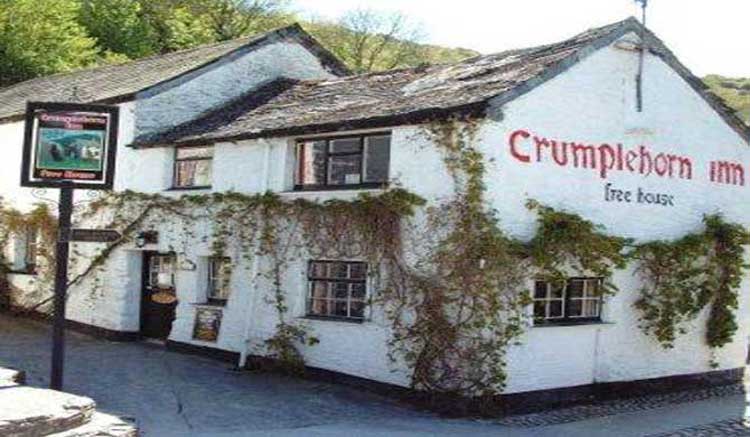 A Mysterious Figure And A Ghostly Chat

Although only an inn since 1972, the attractive group of buildings comprising the complex now known as The Crumplehorn Inn are far older, and have had ample opportunity to acquire a few otherworldly residents.

In the bar, for example, witnesses speak of an indistinct 'something' glimpsed out of the corner of the eye, but which has apparently disappeared when they turn to look at it.

Late one Sunday night a barmaid had turned the lights off at the end of her shift and was walking past the toilet when suddenly the door creaked wide open.

Thinking she had locked someone in, she shouted an apology, only to be left gazing in disbelief as the door promptly closed again.

Mystified, she went to investigate, but found that the toilet was empty.

The inn's former owner, Andrew Taylor, has encountered the wraiths that haunt the inn on several occasions.

His accommodation was situated in the 16th-century mill house.

One morning he awoke to see someone standing in front of the mirror, holding a cigarette and clasping their hand to their forehead "as though they had a really bad headache."

Thinking it must be his wife, Ann, he asked if she was all right.

But then he saw that Ann was still in bed beside him - and when he looked back towards the mirror the figure had gone.

Andrew told me that he was uncertain whether the mysterious figure was associated with the other phenomena that he and Ann had experienced.

Sometimes, lying in bed late at night, they would hear the voices of a man and woman whispering in the loft above them.

On one occasion they even heard the sound of a door latching, although there is no door in the loft!

The Soldier And His Lady-Love

Ann, who sadly died in 1994, was very psychic and formed the impression that the male voice belonged to a World War One soldier who had deserted and was hiding in the loft of the old mill.

The female voice was that of his lady-love. Eventually he was captured and sent back to the front where he was killed in the trenches; but it seems that every so often the revenants of the two lovers return tthe place where they shared their last moments together.

After eighteen happy years at the inn Andrew sold the Crumplehorn Inn and Mill in May 2005.

The new owners Alan and Sonja Crockford still continue to extend a warm welcome to visitors and the place is still possessed of a delightful and warm ambience.