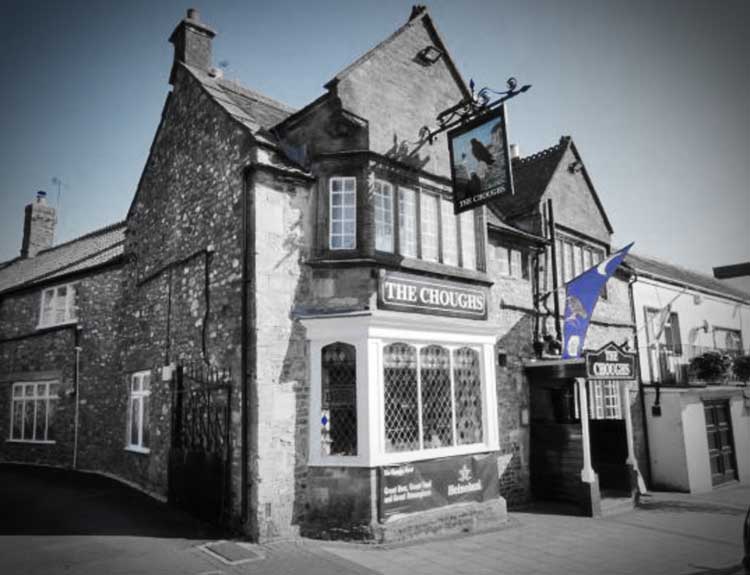 A rich array of phantoms inhabits the 16th-century Choughs Hotel in Chard.

It is a mysterious building of solid stone, riddled with secret passageways and hidden rooms, period furnishings and dark timbers.

Set into the wall of an ancient fireplace is what appears to be an inverted tombstone, on which can be discerned a weathered inscription that looks like the name ";Winifred".

It is said that anybody who attempts to take a picture of this mysterious relic using flash photography is destined to fail.

The most sophisticated camera equipment has been known to malfunction and, even if the flash does go off, the resulting images are either very foggy or else do not appear on the negative at all.

Successive landlords have grown used to explaining the anomaly to prospective photographers with the warning, ";The ghost won't like it!";

Several Ghosts To Choose From

No one is certain which ghost is responsible for the phenomenon and, since there are several to choose from, the would-be ghost seeker might be better rewarded seeking out a spectral rather than a photographic image.

A former landlady was walking along an upstairs corridor one night when she encountered the mysterious figure of a knight in armour.

His bulk was blocking the passageway, and she thought at first that he must be something to do with the carnival that was taking place in the town that day. She asked him politely if he would mind moving aside to enable her to pass and was nonplussed when he simply vanished.

The ghost of a sinister-looking old man has been seen crouched by the fireplace in the bar. Some say that this particular entity is that of Judge Jeffreys. He supposedly stayed at The Choughs in a room where his coat of arms can still be seen in bas-relief on the wall.

In the early 20th century a guest at the hotel was awoken one night by the sound of a woman's voice, alternating between whispering and laughing.

It was accompanied by the more forceful and menacing voice of a man who appeared to be remonstrating with her. As the strange sound ceased the guest fell back asleep. But next morning he awoke to find a deep red weald across his face, as though a whip had struck him. Not surprisingly he quickly paid his bill and departed.

Ethereal figures seen drifting about other parts of the hotel, objects that move of their own accord, and doors that slam in the night, are just some of the other supernatural occurrences that give The Choughs a genuine air of antiquated mystery. Those who come here seeking the ambience of old England will not be disappointed.