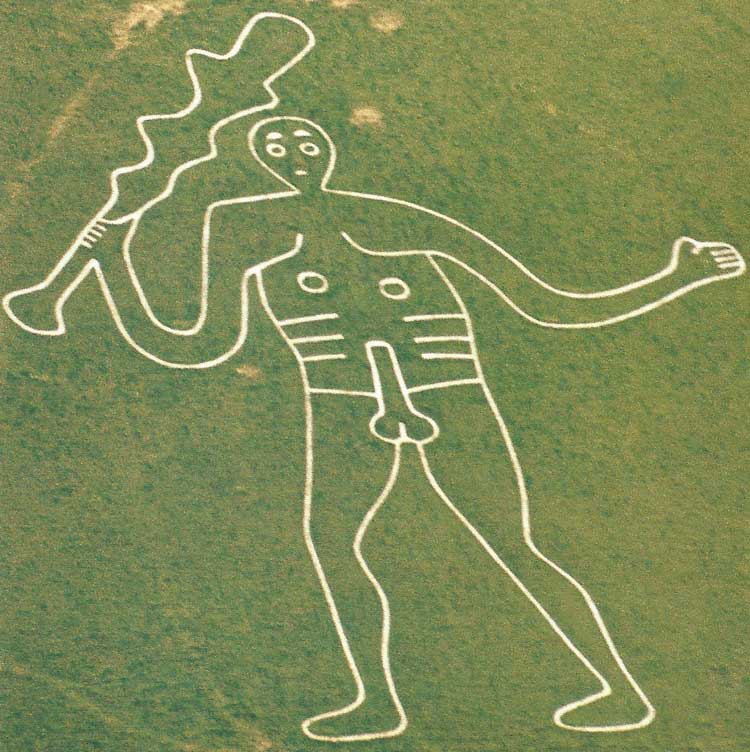 A Mysterious And Controversial Figure

Standing an impressive 180 feet tall, the club-wielding Cerne Abbas giant is the most detailed of all Britain's hill-figures resplendent with eyes, nose, mouth, breasts, ribs -and genitalia of such awesome proportions, that they can only be truly appreciated from the air.

Indeed, such is his proud and unabashed stance that he has long been regarded as a fertility symbol whose assistance has been eagerly sought by courting and married couples alike - many of whom, it is rumoured, have consummated their relationships between his massive chalk thighs.

His origins, however, are lost in a swirling haze of folklore and speculation.

Most prominent is the theory that he depicts the Greek-Roman god Hercules and was carved into the chalk hillside during the reign of the Emperor Commodus (AD180-AD193) who, believing himself to be a reincarnation of Hercules, revived his cult.

Legend asserts that the figure represents an invading giant who, having rampaged inland from the coast fell asleep on the hillside and was decapitated by the local people, who then carved his outline into the chalk hillside as a warning to other marauders.

A third hypothesis points to the fact that his thirty-foot phallus is directly aligned to the rising sun on the 1st of May.

This, coupled with the fact that, until the early years of the 20th century, Mayday celebrations were held atop the hill above the giant's head seems to suggest that he may well have been linked to some form of ancient fertility ritual.

The Giant And The Monastery

One curiosity of the surroundings is the proximity of a medieval monastic foundation to what is a blatantly pagan symbol.

It is possible that this Abbey was deliberately sited in order to either exorcise the giant's power.

It has even been suggested that he was created in about 1535 by the monks in order to embarrass their Abbot, Thomas Corton, whom they accused of keeping concubines in a cellar of the abbey, lavishing gifts on his illegitimate son and allowing lewd women to hang around the monastery all day long.

The theories as to his origins go on and on, as do arguments over his explicitness.

In 1980 Devonshire artist, Kenneth Evans-Loude sought permission to create a giant figure of Marilyn Monroe in her famous skirt fluttering pose from The Seven Year Itch on the hillside opposite the Cerne Abbas Giant.

Sadly his scheme failed to win Arts Council funding causing The Times to comment wryly that "Some Like It Not."

Ophelia Was Not Affronted

Local dignitary the Hon. Ophelia Pashley-Cumming was not impressed by their decision. "I have never felt affronted by the Cerne Giant," she fulminated, "and have no time for the simpering old ladies who cluck-cluck every time they pass it. The only residents I sympathize with are the elderly males or tired Dorchester businessmen who are constantly reminded by their wives and mistresses en passant of how far short they fall of the splendid male vigour displayed before them."