THE BUCKET OF BLOOD 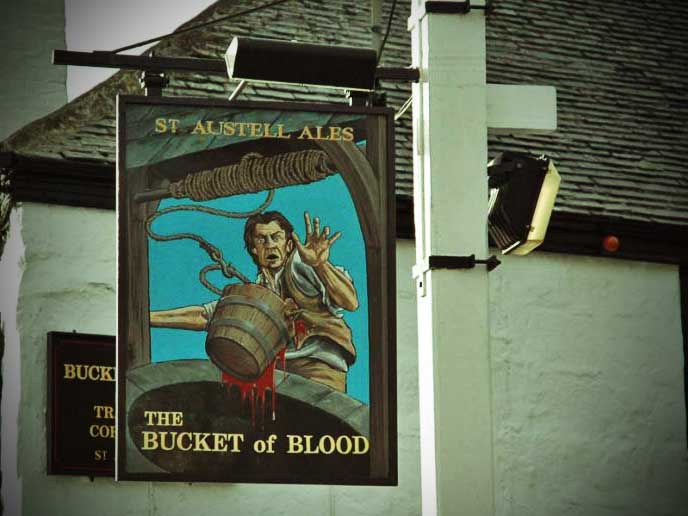 A Name To Reckon With

Branding is hugely important to any fledgling business. You want to come up with a name that not only reflects your aspirations as a business owner, but also one that will prove an irresistible draw to prospective clients.

When it comes to pub names, The Old House at Home, The Cosy Nook, The Village Inn, can all appeal to that sense of nostalgia that will, hopefully, bring footfall across the threshold and set the pumps pumping and the tills tilling.

Of course, you could opt for a different approach and give your pub a name that might not instantly conjure up visions of halcyon days of yore, but will certainly be so unusual and unique that it will be totally memorable.

Such an approach has been adopted by this delightful 18th century Cornish Hostelry. It offers a warm welcome, a mouth-watering menu, a thirst quenching selection of delicious ales - and a name that, in 2011, earned it an award for the quirkiest pub name in the country.

Why "The Bucket Of Blood"?

There are several theories and stories as to how the pub came by its unusual epithet.

The most persistent of these is the oft-recited tale of how a former landlord of the pub went out to draw water from the pub's well. Having lowered his bucket into the well's depths, he hauled it up and, to his horror, found that it was filled with blood.

A hasty investigation was carried out, and the cause of the phenomenon turned out to be the mutilated corpse of a local excise officer that had been thrown into the well.

The consensus was that he may have stumbled upon a local smuggling racket and had duly been silenced by the gang, after which his body was dumped into the chilly depths of the well to conceal the crime.

It's a good story, and is the favoured theory of local folklorists and storytellers.

A more mundane explanation holds that the water from the well was tainted by deposits from a local tin mine which gave it a distinctive blood-like crimson hue.

Ghosts At The Bucket Of Blood

It must be said that any ghost is hampered in the chill-factor stakes when pitted against such a macabre name, but this hasn't deterred a few resident spooks from putting in occasional appearances.

A phantom monk is said to lurk in some of the pub's darker recesses. Tables and chairs have been known to be re-arranged by some unseen hand, or hands, overnight, much to the consternation of staff who just want to get the pub open and start pulling pints. Whether these same unseen hands are responsible for administering the phantom shove in the back that some staff members have reported is unknown.

And, inevitably, the mangled spectre of the unknown victim, whose long ago demise may have given rise to the pub's unusual name, has also been known to put in occasional appearances close to the site where he suffered his ignoble fate