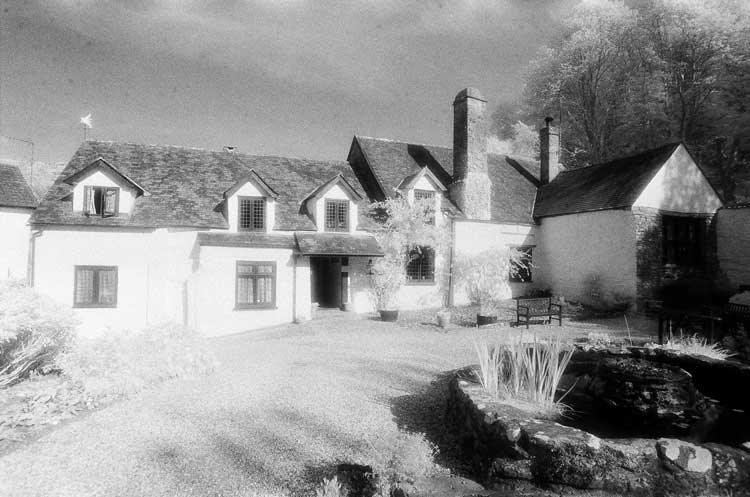 From Manor House To Farmhouse

Chambercombe Manor is thought to date back to the 12th century, and although it most certainly saw days of glory over the centuries that followed (including a visit from Lady Jane Grey, herself a descendent of the house’s original owners the Champernon’s), at some stage in its history it fell from its lofty pedestal and for much of its recent past was used as a farmhouse.

Yet it was as if during those lowly days the house was just biding its time, awaiting the dawn of a new era when it would awaken from its long slumber and bask once more in the grandeur of its surroundings.

Thankfully, many of the original fixtures and fittings survived and today, thanks to the efforts of a dedicated Trust, the house and its grounds have been beautifully restored, and visitors can soak up its atmosphere, admire its impressive rooms and keep a keen eye peeled for its otherworldly inhabitants.

The origins of the house’s most famous ghost go back to 1865 when the then tenant carried out repairs to the roof and came upon the outline of a window for which he could find no matching room.

Mystified, he began a search of the house’s interior and realised that there must be a hidden room between what is now Lady Jane Grey’s Room and the one adjoining it.

He and his wife broke through the wall and poking a candle through the hole, gazed into the gloom of a secret chamber at the centre of which stood a four poster bed surrounded by a musty curtain. Scrambling into the room, they pulled the bed curtain aside and there upon a decaying bedspread, they found a gleaming white skeleton.

Although it was later ascertained that the skeleton was that of a young woman, subsequent enquiries failed to shed any light on either her identity or the cause of her death.

A tradition grew up that the events which led to the woman’s incarceration date back to the 18th century when the tenant of the house was William Oatway.

His father, Alexander, had been a notorious local ’wrecker’ - a band of nefarious villains who would wave lights from the shore in the dead of night hoping to lure ships onto the treacherous coastal rocks so that they could plunder the wrecks and murder any crew or passengers who might have survived the initial impact.

William, however, was of an altogether more law abiding and gentle disposition than his father, and having married a beautiful Spanish woman - whom he had saved from one of his father’s ‘wrecking’ expeditions - he leased Chambercombe Manor and brought her to live there. One regret constantly gnawed at William.

The fact that he didn’t have the money to purchase the house outright in order to provide a family home that could be passed down to future generations. But that aside he and his wife were extremely happy and their joy intensified when they had a baby daughter, who they christened Kate and who grew into a beautiful and spirited young woman.

One day Kate met and fell in love with an Irishman named Wallace, who was the Captain of a pirate ship. The two were married, and decided to settle in Dublin.

Tearfully Kate bade her parents farewell but as she left the house in which she had spent an idyllic childhood she promised them faithfully that she would one day return for a visit.

William and his wife settled down into a house that now seemed so empty without the presence of their vivacious daughter. But eventually they grew used her absence and eagerly looked forward to the day when they would see her again.

One day a ferocious storm blew up along the Devon coast and William went down onto the beach to see if any ships were in distress. As he stood gazing out to sea, bracing himself against the lashing rain and the howling wind, he heard a faint murmur from the nearby rocks.

Clambering over them he found a badly injured young woman, whose bloodied features had been rendered unrecognisable by the pounding her body had evidently taken on the rocks.

Lifting her up, William carried her to the manor house where he and his wife tried desperately to save her life. But her injuries proved too serious and later that night she died without regaining consciousness.

As they searched her body for some clue to her identity they found a money belt strapped around her waist. Opening it William discovered that it contained enough gold coins and jewels to enable him to achieve his most cherished ambition, the ownership of Chambercombe Manor. The temptation proved too great and with a shaking hand William reached out and relieved the dead woman of her valuables.

Next morning, a shipping agent came by to enquire if they had any knowledge of a woman passenger who was missing off a wrecked ship. Realising that if he admitted to having found the woman he would probably be forced to return the valuables, William denied all knowledge of her.

As the agent was leaving he asked William to keep an eye on the coastline should the body of the woman, Mrs Katherine Wallace, be washed up. Realising that that he had robbed the dead body of his beloved daughter, William walled her body up in a secret chamber and then he and his wife departed Chambercombe Manor, never to return.

So runs one of several legends that attempt to explain the mysterious skeletal remains at Chambercombe Manor, and thus has Kate Wallace’s ghost written itself into the history of this lovely old house, her spectral footsteps walking along corridors, whilst a low moaning has been heard emanating from the former secret room where her remains were found.

Kate’s, however, is not the only ghost to haunt Chambercombe Manor.

Two ghostly little girls have been seen in the upstairs rooms, whilst a ghostly lady in a long white dress has been seen in the vicinity of the pond behind the café. Mediums visiting the house have picked up on several spirits including that of a rather friendly man, who once tried to possess a woman during a séance held in the Tudor Room.

In addition to ghostly appearances, the house also has several cold spots and there is a staircase which ascends from the Dining Room to the Tudor Room that has a decidedly unnerving atmosphere and which few people like to go up!